The Florence Baptistery (Battistero di San Giovanni), also known as the Baptistry of Saint John, is a religious building in Florence, Italy, and has the status of a minor basilica. The octagonal baptistery stands in both the Piazza del Duomo and the Piazza di San Giovanni, across from Florence Cathedral and the Campanile di Giotto.The Florence Baptistery is one of the oldest buildings in the city, constructed between 1059 and 1128 in the Florentine Romanesque style. Although the Florentine style did not spread across Italy as widely as the Pisan Romanesque or Lombard styles, its influence was decisive for the subsequent development of architecture, as it formed the basis from which Francesco Talenti, Leon Battista Alberti, Filippo Brunelleschi, and the other architects created Renaissance architecture. In the case of the Florentine Romanesque, one can speak of "proto-renaissance", but at the same time an extreme survival of the late antique architectural tradition in Italy, as in the cases of the Basilica of San Salvatore in Spoleto, the Temple of Clitumnus, the church of Sant'Alessandro in Lucca. The Baptistry is renowned for its three sets of artistically important bronze doors with relief sculptures. The south doors were done by Andrea Pisano and the north and east doors by Lorenzo Ghiberti. The east doors were dubbed by Michelangelo the "Gates of Paradise".The Italian poet Dante Alighieri and many other notable Renaissance figures, including members of the Medici family, were baptized in this baptistry. In fact, until the end of the nineteenth century, all Catholic Florentines were baptized here.For a long time, it was believed that the Baptistry was originally a Roman temple dedicated to Mars, the tutelary god of the old Florence. The unscholarly chronicler Giovanni Villani reported this medieval Florentine legend in his fourteenth-century Nuova Cronica on the history of Florence. However, twentieth-century excavations have shown that there was a first-century Roman wall running through the piazza with the Baptistry, which may have been built on the remains of a Roman guard tower on the corner of this wall, or possibly another Roman building. It is, however, certain that a first octagonal baptistry was erected here in the late fourth or early fifth century. It was replaced or altered by another early Christian baptistry in the sixth century. Its construction is attributed to Theodolinda, queen of the Lombards (570-628) to seal the conversion of her husband, King Authari. In 2007, three original panels were taken on tour to the United States: Atlanta, Chicago and New York.The octagon had been a common shape for baptisteries for many centuries since early Christian times. The number eight is a symbol of regeneration in Christianity, signifying the six days of creation, the Day of Rest, and a day of re-creation through the Sacrament of Baptism. Other early examples are the Lateran Baptistry (440) that provided a model for others throughout Italy, the Church of the Saints Sergius and Bacchus (527-536) in Constantinople and the Basilica of San Vitale in Ravenna (548).The earlier baptistry was the city's second basilica after San Lorenzo, outside the northern city wall, and predates the church Santa Reparata. It was first recorded as such on 4 March 897, when the Count Palatine and envoy of the Holy Roman Emperor sat there to administer justice.{Citation needed|date=November 2009} The granite pilasters were probably taken from the Roman forum sited at the location of the present Piazza della Reppublica. At that time, the baptistry was surrounded by a cemetery with Roman sarcophagi, used by important Florentine families as tombs (now in the Museo dell'Opera del Duomo).The present much larger Baptistry was built in Romanesque style around 1059, evidence of the growing economic and political importance of Florence. It was reconsecrated on 6 November 1059 by Pope Nicholas II, a Florentine. According to legend, the marbles were brought from Fiesole, conquered by Florence in 1078. Other marble came from ancient structures. The construction was finished in 1128.An octagonal lantern was added to the pavilion roof around 1150. It was enlarged with a rectangular apse on the west side in 1202. On the corners, under the roof, are monstrous lion heads with a human head under their claws. They are early representations of Marzocco, the heraldic Florentine lion (see Loggia dei Lanzi).Between the fourteenth and sixteenth centuries, three bronze double doors were added, with bronze and marble statues above them. This gives an indication that the Baptistry, at that time, was at least equal to the neighbouring cathedral in importance.The Baptistry has eight equal sides with a rectangular addition on the west side. The sides, originally constructed in sandstone, are clad in geometrically patterned colored marble, white Carrara marble with green Prato marble inlay, reworked in Romanesque style between 1059 and 1128. The pilasters on each corner, originally in grey stone, were decorated with white and dark green marble in a zebra-like pattern by Arnolfo di Cambio in 1293. The style of this church would serve as a prototype, influencing many architects, such as Leone Battista Alberti, in their design of Romanesque churches in Tuscany.The exterior is also ornamented with a number of artistically significant statues by Andrea Sansovino (above the Gates of Paradise), Giovan Francesco Rustici, Vincenzo Danti (above the south doors) and others.The design work on the sides is arranged in groupings of three, starting with three distinct horizontal sections. The middle section features three blind arches on each side, each arch containing a window. These have alternate pointed and semicircular tympani. Below each window is a stylized arch design. In the upper fascia, there are also three small windows, each one in the center block of a three-panel design.The apse was originally semicircular, but was it was made rectangular in 1202. 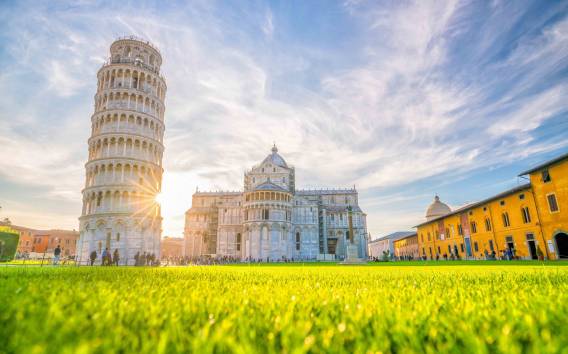 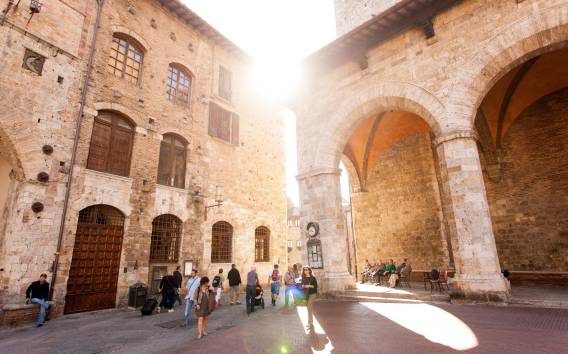 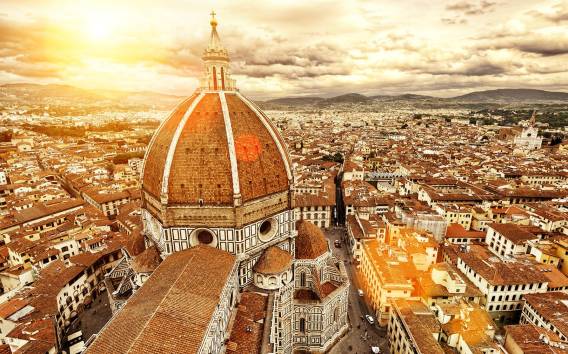 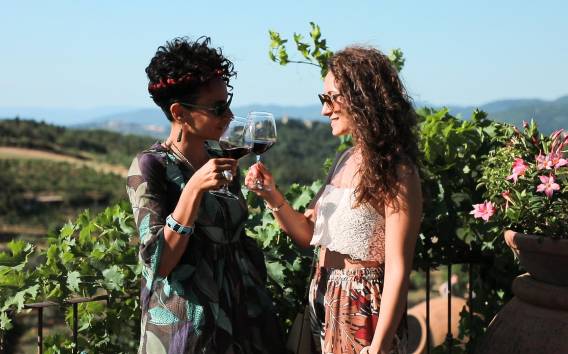